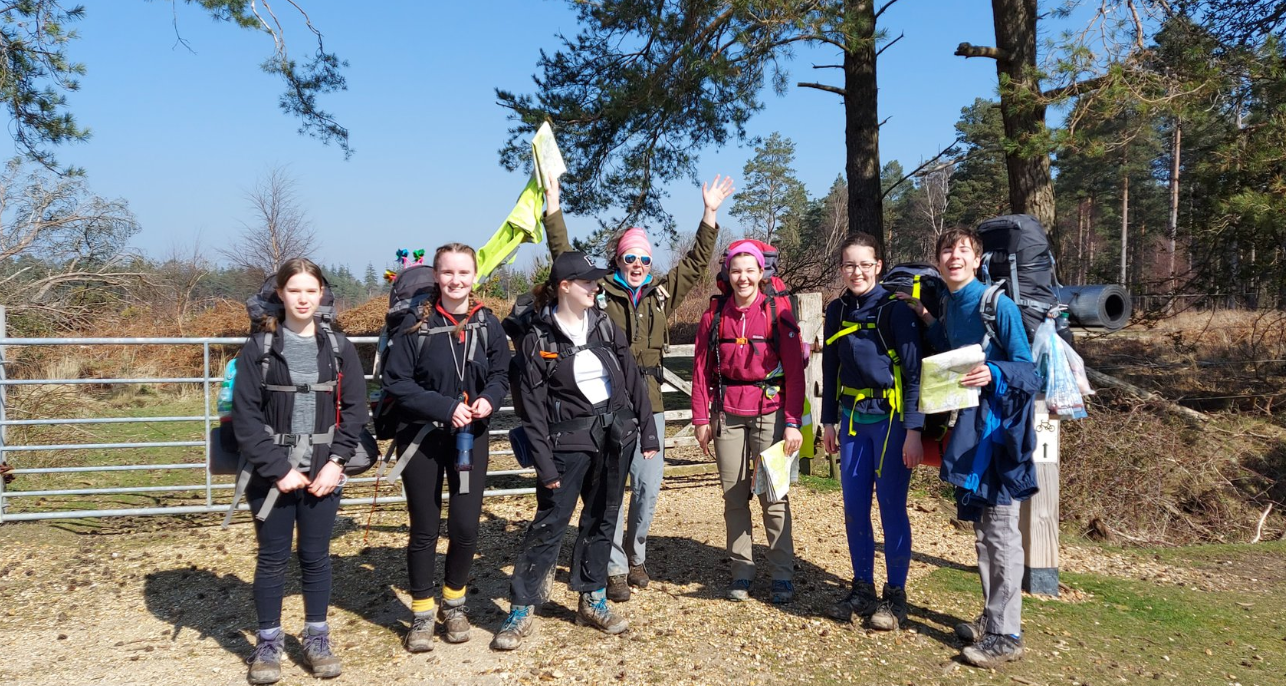 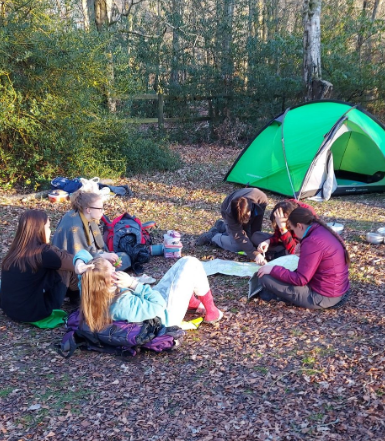 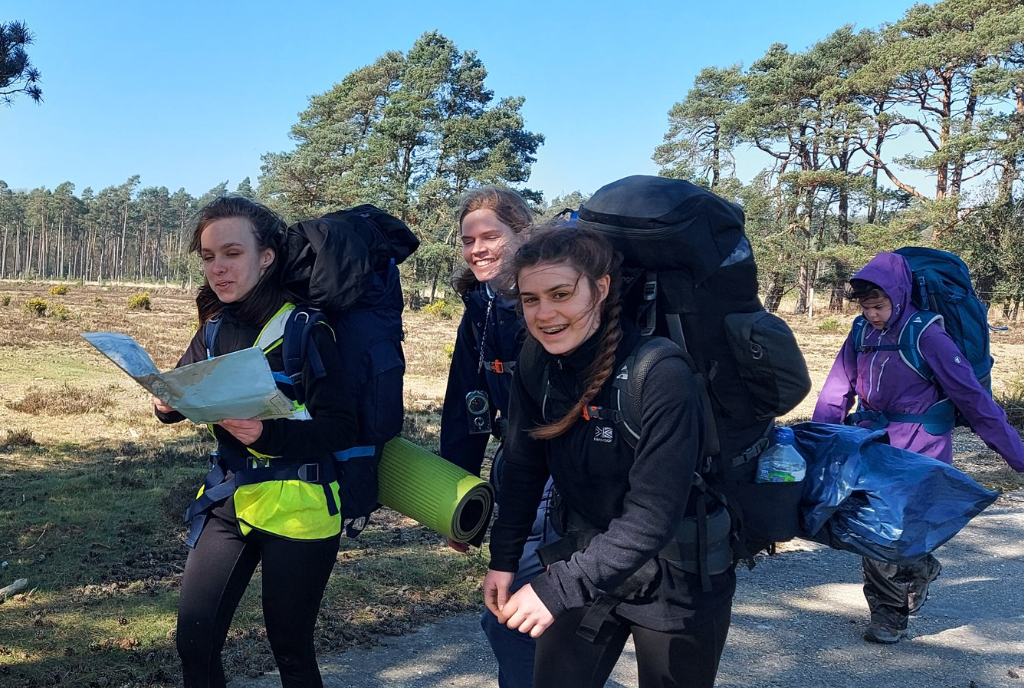 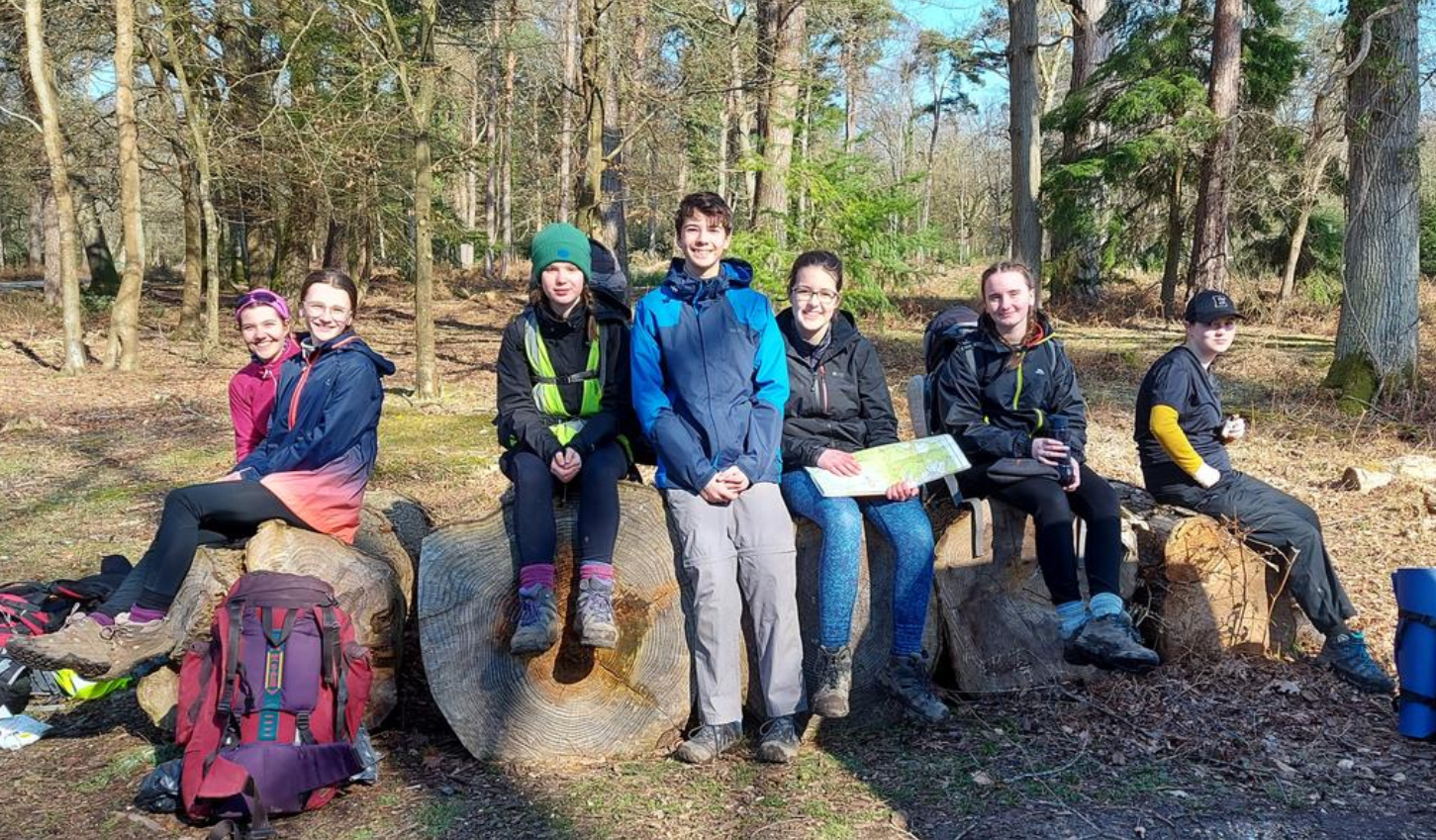 Thank you to Evie, Year 11, Rowling House, for her Silver DofE diary entry.

“Bruised hips, sore shoulders, aching feet, blisters, shredded hands, feeble legs, wind-beaten lips, one hour of sleep - expect no less from a Silver DofE expedition. But, pain wasn’t the only outcome of our three-day trek; there also came extreme feelings of accomplishment, joy and excitement. I was lucky to have an amazing group of people to experience the wonders and misery of Silver DofE with - and without them - I might still be lost somewhere in the vast terrain of the New Forest!

“The first challenge began long before the bus ride to our expedition destination during the packing stage, something I think it is safe to say a couple of my group members failed at terrifically. Excited, I packed the Sunday before, and then repacked having reached the top of my bag with only my sleeping bag and clothes. Dad managed to talk me down from five pairs of pants to two (one for each day), and removed many other items including my flip flops. Once I had plenty of room left in my bag and all my food packed, I was ready to go.

Awake at 5:30 and ready to go by 6:45, I arrived at school eager and excited for the days that lay ahead. Before I knew it, we were off, singing full renditions of Joseph and the Amazing Technicolour Dreamcoat (half my team having been in the school production) and three hours later, arrived in the New Forest to be assigned our instructors.

“Day one was fairly relaxed, and even a little boring. We were assigned Emma as our instructor to guide and teach us on our travels, and after packing the group equipment into our bags, off we went into the wilderness to begin our weekend of ups and downs.

We walked with another group through some nice landscapes, learning lots of nifty map skills, working as a team and spotting many cows and horses. At one point we walked through an area that I can only describe as looking like the Dead Marshes from the Lord of the Rings, a fitting landscape considering I was bearing the One ring on a chain around my neck, a heavy weight I was willing to carry in order to save Middle Earth from the rise of Sauron. It seemed Emma had a lot more faith in our group than we did, because there was one point where she gave us the maps, told us to meet her at a designated place and then walked off while we were having a break. Our first group argument occurred in this time as we debated over which path to take. Our group ended up walking about 12.7 km - 2.7 km more than the other groups - as we were the first to come across a closed bridge which Emma then warned the other groups about. We had to reroute and go back the way we came meaning we ended up as the last group to get to camp, but at least we had a good excuse.

“Night one was horrible. I’m not going to pretend it was all candy floss and unicorns because it wasn’t. The camp was small, crowded and covered in twigs. We managed to get our tent up and made some pasta before getting ready for bed in the tiny bathroom which we had to share with another, much bigger, group of DofE’ers. A meeting was held in which instructor Tony congratulated us on completing Day one and Mrs McCormack and Mr James awarded the Top Banana and the Windmill Wally. Emily’s packing of not one, but three, portable chargers on a phone-free expedition won her Windmill Wally, or Wally as we called him, who, just like Emma, quickly became part of the family and had his fair share of DofE injuries, after being sat on, twice, before being given to Rory’s group following the tent pole fiasco on Day 2. Most of the camp ended the night with a large game of Uno whilst others played cards in their tent before going to ‘sleep’, an activity of which I did not take part in as much as I would’ve liked.

“Morning came all too soon as we awoke at 6:00 and prepared ourselves for another long day of walking. Tents were packed, routes were planned, breakfasts were eaten, boots were tied and we were off. Day two was a little more eventful as we became more independent, shoes became more excruciating, and cares became irrelevant. Pain wise, day 2 was better. Terrain wise… not so much. Emma challenged our map reading skills by taking our maps away and leading us off route. She then returned the maps and asked us to make our way back on route. She let us go off on our own, which led to a wrong turn at the river, but everything turned out fine as our path got us to the right place in the end, while passing through a very nice Sahara-like area.

We moved on, heading towards the second camp. Walking, pain, nice views, lunch, more walking, horses, wild wees… the whole lot. While walking past a farm we came across some mud. Lots of mud. And thorns. We tried to avoid the mud and thorns, which led to certain members being attacked by the bushes then falling into the said mud we were trying to avoid, a double failure if I do say so. But before we knew it we found ourselves at camp number two.

“Camp 2 was much nicer, in a large open field. We put our tents up, ran around in our socks and then got told off by Tony for running around in our socks. We cooked our dinner, beans and sausages for me, and ate on the field as a group. Victoria and Rory decided to make curry, which we had to clean up by scraping the burnt rice from the cooker. We spent our final few hours watching the stars and playing more cards. We could see Orion, the Big Dipper, Cassiopeia and even the Andromeda galaxy, the only galaxy moving towards our Milky Way. Everyone seemed to quiet down a lot earlier on night two and most people were asleep by 9:30. The night was freezing but we had layers so everything was top-notch.

“Up by 6:00 again and ready to go by 7:45, the morning went by so quick. The first part of our route was back the way we had come, and we hit checkpoint after checkpoint, stopping at checkpoint 2 to sing Joseph songs with instructor Naomi, and heading back down the muddy thorn path we had fallen through the afternoon before. When we reached checkpoint 3, there were two other groups waiting, so we settled down on some logs and waited for Emma to walk us up to the road and watch us cross. We practiced this a lot, with Freya and Eloise on the ends in hi-vis jackets checking for traffic, followed by all of us speed walking to the other side when they announced it clear. We continued to sing songs as we made our way to the next checkpoint where we sat with Mrs McCormack and Mr James for a while.

If you think the rest of the walk continued with us hitting checkpoint after checkpoint then you would be wrong, because it went downhill (metaphorically, not physically!) from here. At checkpoint 4 we had a choice of three paths. We decided the left one was quickest and off we trotted. Around half way between checkpoint 4 and 5, one of our teammate’s feet began to hurt to the point of tears so we decided to take a break to try and sort it out.

What felt like many hours later, we made it to checkpoint 5 which was not attended by an instructor. I’ll cut out all the detail and just say that we got lost in the woods. After a few worries (and renditions of Frozen) we decided what to do, although there was some disagreement within the team. We ended up calling Tony to say we would be a little late to the next checkpoint due to bad boots and mis navigation. We walked North hoping we were on track for checkpoint 6, and finally spotted Emma – who we were very pleased to see! Emma led us through swamp upon swamp where Naomi face-planted the floor from tripping over a tree root and there were several times I stepped in mud so deep I thought my foot would come out in Australia!

We were the last group to reach the coach so we dramatically walked towards the other DofE’ers before collapsing onto the ground for the last time in our expedition. We all said our farewells to the instructors and boarded the coach as an end to our three-days of accomplishment (and pain!)

“After three days of walking, playing pooh sticks, wild wees, problems with worn-in and worn-out boots, Mr James’ snoring, Wallys, mud, tears, giggles and many injuries later, we’ve done it! We have completed our practice silver expedition. Yes, practice. We are going to have to do it all again in July and I know it’s going to be just as exhausting, painful and, most importantly, rewarding.”