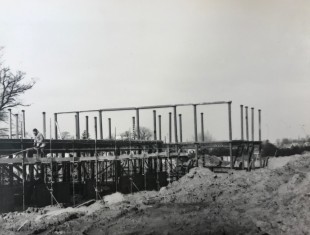 Our school became Cheltenham Bournside School in 1972, and we are proud to have steadily grown to be the largest 11-18 school in Gloucestershire since then. But the history of our school dates back over 100 years!

So how did it all begin?

1907    We were initially set up as Gloucester Road Elementary Schools for 300 students of all ages, with separate schools for girls, boys, and infants.

1919    We then became a mixed central school called The Cheltenham Central School for Advanced Instruction, initially accommodating 300 students aged 11-13. The school was later divided into separate schools for girls and boys once again (The Central Boys School and The Central Girls School).

1949    The Central Boys and Central Girls Schools came together and became Cheltenham Technical High School, in accordance with Butler’s Education Act of 1944. We had around 500 students at this time.

1972    Our school moved to Warden Hill Road and became the first comprehensive school in Cheltenham. We catered for around 650 students aged 11-18 at this point and our name changed to Cheltenham Bournside School, as we remain today!

1915    During World War 1, as with many schools around the country, teaching staff were called to ‘join up’, and the school buildings were taken over by the British Red Cross Society and used as a military hospital.

1928    The land surrounding the school was bought for £30 and turned into a sports field and pavilion. And so began our reputation for excellent sporting abilities!

1940    During World War 2, teaching staff were called to join up once again and although the school continued to function this time, the caretaker spent nights at the school as a firewatcher.